I reviewed the cheapest 7-day cruise itineraries for an entire year and broke down the price, ports, and details of what this year would entail.

I ran a little experiment. I wondered what it would be like to take a cruise every week and spend the entire year at sea.

What would it cost? What ports of call would I get to see? What ships would offer the best deals?

And what is the minimum I would have to spend to enjoy an entire year on a cruise ship, one week at a time?

So, I chose a cruise port, ran the numbers, and came out with some rather interesting results.

Granted, this is not a year-long trip I would likely ever take myself, but knowing some who like to spend their retirement at sea almost every week of the year, I thought it was a fun project.

A few things surprised me along the way, and I wanted to share what I learned with our readers here at Cruise Fever.

There were a few ground rules I used for gathering this information.

Here is the criteria I employed:

Also the cost below is for two people, so the listed fare price, taxes, and fees have already been doubled to account for the second person in the cabin.

What information did I gather for these bookings?

Obviously, there would be more costs involved than the cruise fare, taxes and fees. Things like excursions, gratuities, eating off the ship, and all kinds of other expenses would have to be calculated to get a true cost of this year-long expedition. But these numbers at least will provide a baseline.

As mentioned above, I had to run these numbers twice: Once starting 7-day cruises on a Sunday, and then again beginning on a Saturday. 7-day itineraries typically begin on one of these two days and I wanted to make sure I covered my bases by trying out each of these days of the week.

Why did I start in August?

Simply put, it was far off in the future enough that cruise ships were not going to be booked, and there were plenty of cabins still available.  Since we are looking at prices over an entire year the starting point shouldn’t be that much of an issue.

After comparing prices on booking websites and cruise line websites and spending a few hours compiling the information, here is a breakdown of the results.

This year-long journey would being on August 6th, 2023 and sail out of PortMiami on MSC Seascape.  The cheapest rates for each week would mean sailing on a total of 5 different cruise ships as listed below.

(Data table for these 52 cruises at the end of the article.)

Cost average throughout the year

This chart shows weekly costs of these cruises, showing most weekly totals with cruise fare and taxes/fees.

Related: What are the cheapest weeks of the year to cruise?

Another interesting part of this experiment is how many times some of these ports of call would be visited on a year-long cruising schedule.  Note that since we are sailing out of PortMiami every week it does mean our port stops are limited to these areas below.

Here is the breakdown of how often each port would be visited in a year’s time.

How much would it all cost?

Now, the big question: how much would this year-long voyage cost?

Remember this is by sailing only out of PortMiami starting in August of this year and only choosing 7-day cruise itineraries.  Many other factors could have changed this figure.

I also broke down the taxes/fees and just the cruise fare separately.

Related: What is the best cruise line for you?

What if we left on a Saturday instead?

After seeing that many 7-day sailings out of PortMiami also depart on a Saturday I decided to run these numbers as well, just so we have a clearer picture.

This year-long journey would being on August 5th, 2023 and sail out of PortMiami on MSC Seascape.  The cheapest rates for each week would mean sailing on a total of 5 different cruise ships as listed below.

Note: For this year-long journey we would sail on MSC Seascape a total of 38 times.  This ended up playing a large factor in the final price because of the affordability of MSC cruises.

Also, there were a few weeks in September and October where PortMiami did not offer a 7-day sailing on a Saturday.  For these weeks I simply found the cheapest 6 or 8 day cruise and then lined up the next itinerary to get back on track with Saturday departures.

By the end of November we were back on track for 7-day cruises on Saturdays.

Cost average throughout the year

This chart shows weekly costs of these cruises, showing most weekly totals with cruise fare and taxes/fees. 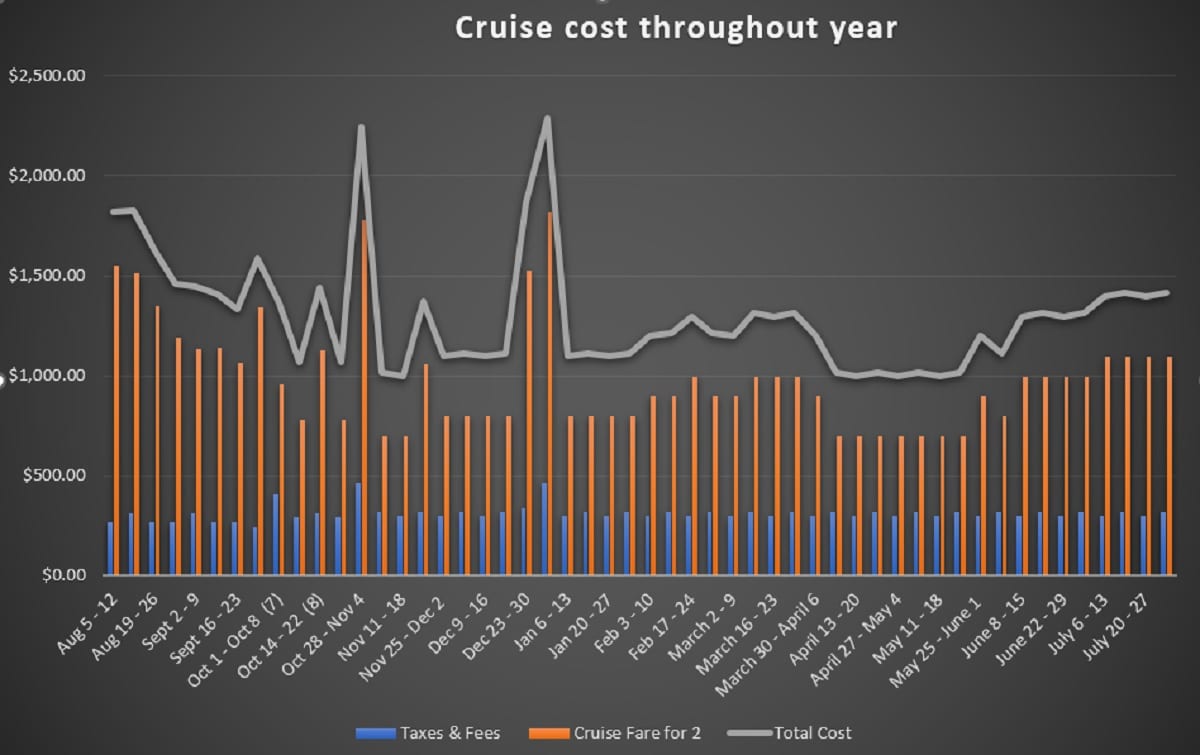 Here is the breakdown of how often each port would be visited in a year’s time if we sailed out of PortMiami on a Saturday each week. 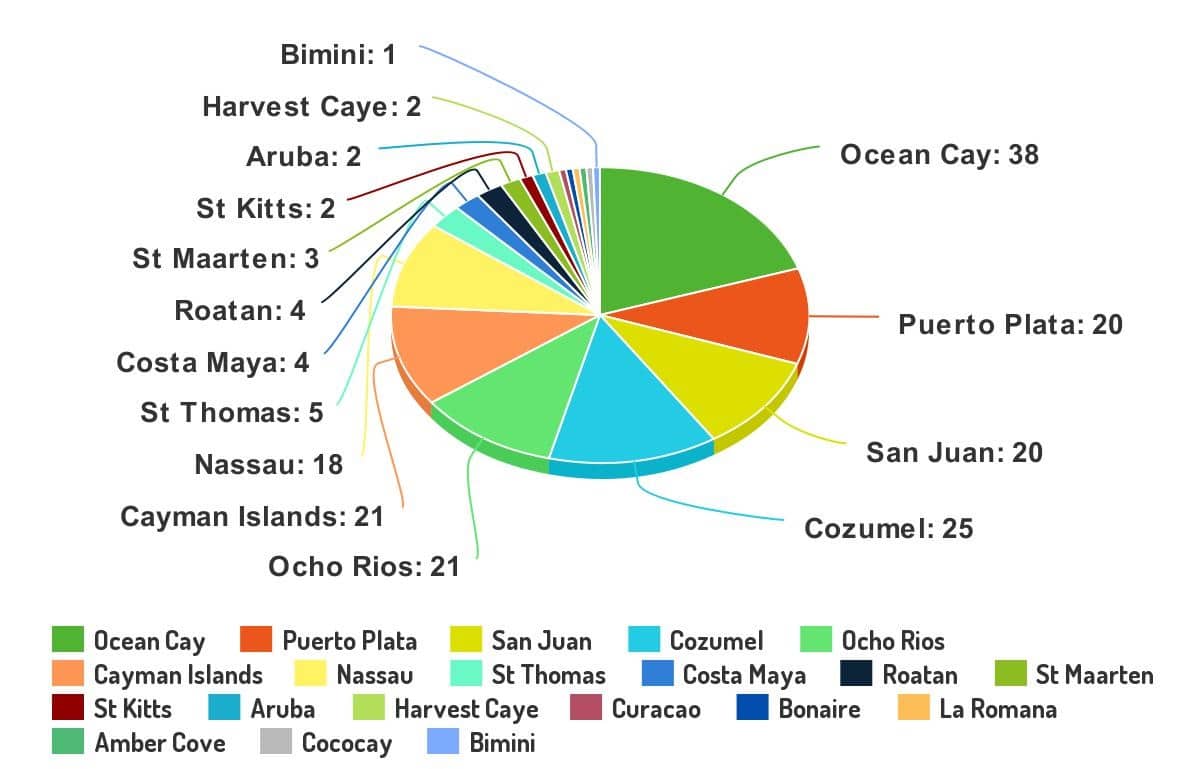 How much would it all cost?

Departing on a Saturday how much would this year-long voyage cost?

Remember this is by sailing only out of PortMiami starting in August of this year and only choosing 7-day cruise itineraries (mostly) that depart on Saturdays.  Many other factors could have changed this figure.

I also broke down the taxes/fees and just the cruise fare separately.

Here is the table for some of the data points I collected.  I eliminated the individual fare cost and tax/fees cost column so the table is easier to read in mobile, but that data has been separated above for the breakdown.

This information below is for the itineraries departing on Sunday.

Sailing on the same ship and heading to the same ports of call over and over again is probably not the ideal way to spend your year.  I, for one, like a little more variety in my travel destinations.

And while you could make the argument that these ports of call could become like a second home after a while, the point of this study was to see how feasible it would be to spend a year on a cruise ship.

If you really wanted to spend a year at sea I would recommend much longer itineraries as well.  Taking a few world cruises mixed-in with 14-day cruises and such would make this a much more interesting task in my opinion.

Prices will change throughout the year as well, so the numbers might work out differently a few weeks from now.

J. Souza
Jon got hooked on cruising after his first cruise on his honeymoon, and today he is always looking for cruise deals and reading information about the cruise industry. Jon lives in the foothills of North Carolina and wishes there were a cruise port that far inland. Jon can be reached at [email protected]
OpinionWhat If You Took a Cruise Every Week for a Year Straight
Previous article
Icon of the Seas Offering 4 Caribbean Itineraries on 2024 Cruises
Next article
Cruise Line Sees Highest Booking Week to Start a Year in 10 Years

7 Reasons to Take a Cruise on Virgin Voyages

How One Cruise Line Is Avoiding Some Cruise Port Bans

Two brothers started Cruise Fever in 2011 when they decided they couldn't stop cruising so they might as well write about it. Do you have Cruise Fever too? Follow along on this incredible voyage!